In Thailand, children, women and men are living in insufferable conditions in immigration detention centres and prisons.

The Immigration Detention Centre program brings friendship and upholds the dignity of people who have been detained away from their family and friends.

Thailand's geographic, social and political situation have long made the country a hub for people on the move, including people who are undocumented migrant workers or seeking asylum. Many of these individuals, when discovered by authorities, are detained in the Immigration Detention Centre (IDC) in Bangkok.
Conditions in the IDC are over-crowded, with around 800 detainees cramped in a small space. There is very little provided in the way of ensuring the health and wellbeing of the detainees. The future for many of the detainees is uncertain, with a lack of means for repatriation. Even those who attain refugee status face slow processing by the overburdened UNHCR and no clarity over their future options. These factors lead to high levels of mental stress and depression among detainees.
Jesuit Mission has for some time provided funding to address enormous shortfalls in the services provided to the individuals in the IDC. The program is now administered by the Jesuit Foundation, who are one of the few organisations allowed to work in the IDC.
The Jesuit Foundation provides medical care and social services to the detainees to promote overall physical and mental health, and wellbeing. Some of the services include routine visits by a nurse to all detainees, a doctor’s clinic, supplementary food and haircuts. The team also run ‘Family Days’ which provide an opportunity for male and female family members, including children and siblings, who are kept in separate cells, to meet and share a meal once a month.
The Jesuit Foundation also, where possible, provide practical and financial assistances for detainees seeking to return home. This includes liaising with the families and friends of individuals to try to arrange airfares and other travel arrangements. They also help contact embassies and other agencies to organise travel documents.

After being detained in the IDC awaiting deportation after being in Thai prisons for average of 15 years, Program Director, Kep (in pink), and Program founder Fr Olivier Morin SJ (seated centre) visit the Nepalese families to see how they are coping and rebuilding their lives.

"Without the support of our Australian brothers and sisters we couldn't do this work. We share our life with the men and women who have to endure such terrible conditions in prison and detention here. We help them, and our supporters help us. It is joyful and we are grateful for everything you give us. Thank you."
– Kep, Jesuit Foundation
The program supports all people in the IDC who want assistance, but priority is given to the most vulnerable detainees, including children, pregnant women, trafficked victims, elderly, and those with physical or mental health needs.

Pore is a 40-year-old Nepalese man who had been held at the Bangkok Immigration Detention Centre. Before that, he had been imprisoned in Thailand, charged with the illegal transport of goods – a job he took up out of desperation to provide for his wife and newborn daughter. He was caught, charged and sentenced to 15 years in a Thai prison, far from his home and family.
When Pore was finally released from prison, he was immediately transported to the Immigration Detention Centre because he didn’t have the appropriate papers to be in Thailand. A new torment began for him as the conditions in the detention centre were even worse. He feared he’d have to continue living in the appalling conditions at the Detention Centre where he shared an unventilated 8 x 20m room with 130 men. And he feared he would never return home to see his daughter again.
In the Immigration Detention Centre, the Jesuit team visited Pore, bringing him letters and photos from his daughter to help keep his spirits up (continuing the kinship/fellowship that Kep’s Prison Ministry team had extended to him during his lonely prison term).
Finally, the day came when Pore’s dream came true – he was reunited with his daughter in Nepal. It was a wonderful reunion for Pore and his daughter who are now living together and getting to know one another after such a long, difficult separation. Life is not easy as Pore tries to reintegrate back into life in Nepal, where so much has changed since he left, but with help from the Jesuit Mission, he is training to become an electrician. 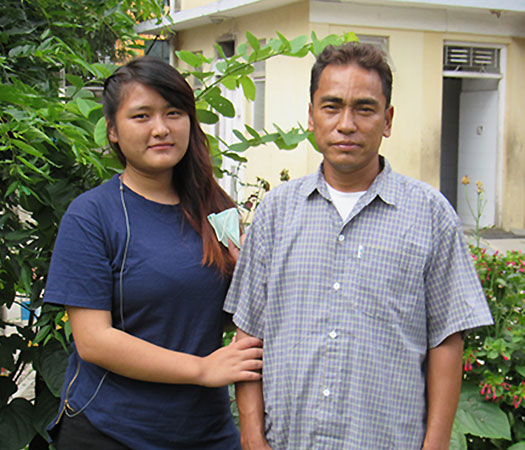 Pore reunited with his daughter Muna.

“I am thankful to you all for helping me stand in front of my daughter as a proud father … I was lost and alone as a young man, but I found the best helping hands. I consider myself lucky for having found them.”
- Pore