“How will my sister live?” This is a question Hy Buney would often ask herself about her little sister, Srey Neang. She was afraid for Srey Neang’s future, knowing that life would not be easy for her.

Srey Neang, now 21 years old, has been living with mental illness and a behavioural disorder since a young age. She never knew her father because he abandoned the family when she was a baby. Her mother suffered from alcohol abuse and died when Srey Neang was just five years old leaving Srey Neang and her seven siblings to survive on their own.

Srey Neang’s eldest sister, Hy Buney, took on the role of parent and worked tirelessly from a young age to raise her brothers and sisters. It was especially hard for Srey Neang who was not able to take care of herself. Hy Buney told us how heartbreaking it was to see Srey Neang hiding away from other people – finding refuge in being alone as her mental health illness became more apparent. But, the isolation made Srey Neang’s condition worse as she was not able to develop her communication and social skills. Even a simple conversation with another person felt like too much for Srey Neang to handle. So, the outside world became a frightening place for her.

Hy Buney worried that Srey Neang would never be able to live a normal life as an independent person.

Then came a ray of hope.

Because of supporters like you, Srey Neang was able to join the Enhancing Life of People with Disabilities program run by Karuna Battambang Organisation (KBO) in Cambodia. Srey Neang was involved in the support program for three years. She is now no longer afraid to talk to other people. She can take care of herself, and even help out at her sister’s shop making and selling food. Hy Buney shared how she can now see a brighter future for Srey Neang.

You have helped Srey Neang to overcome enormous challenges and live independently with confidence – free from fear of the outside world. Thank you!

“Now I have my own skill as a cook. I can make coffee, make sweets, and lemon tea. Thank you Karuna Battambang Organisation, and especially my lovely sister who always helped me so that I can have a good day like today”, beams Srey Neang.

Watch here how Srey Neang is living an independent life. 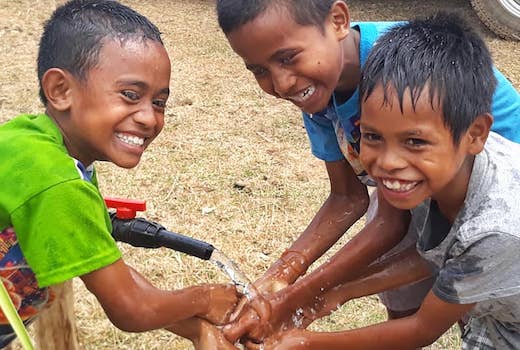 Look at the joy you’ve brought this village!

The gift of water – enabled through your generosity – has brought this community joy and hope for a better future. More >

Amid the COVID-19 pandemic, the JRS team in Mae Hong Son in Thailand has been working day and night to find ways to continue offering education to the children living in the camps.More >